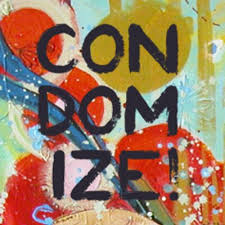 It seems that in the vein that condoms allow for safe sex, the so called Christian world has followed suit allowing for a safe, non-transferrable Christianity.

There are Christian schools, music, books, bookstores, dating sites, yellow pages, jewelry and don’t forget the clothing, not the least of which are the T-shirts.

I would suspect that it is easy to arrange your life in such a way that you don’t have to relate to someone who doesn’t have the same theological, political, lifestyle bent as yourself in any real way.

A life totally devoid of “them” and full of “us.”

A Christianity lived out with a latex barrier between life (supposedly) with God and life without God.

No wonder the gospel has never penetrated more that a third of the world’s population.  A tragic statistic when expose reveals  that one third reached might have more to do with physical birth than spiritual birth.

No wonder the ‘nones‘ are growing.  The numbers tell the story.  Check out this link for more.

David Kinamann in his book UnChristian has an image problem.  God knows that I know a lot about managing an image.  But really, is it an image problem as much as a Mission problem or at at least a hearing problem.

Jesus, as Eugene Peterson reminds us in his rendering of John 1, moved into the neighborhood.  It is no secret that Jesus was criticized for spending time with people of questionable character.  Jesus declared that the healthy don’t need a doctor and for that he came to seek and save the lost.

It is hard to reach the lost if we hole ourselves up in our “Christian” insulated* world putting more energy into keeping from being polluted than obeying Jesus’ mission to bring heaven to this world.  An electrical insulator is a material whose internal electric charges do not flow freely, and therefore make it nearly impossible to conduct an electric current under the influence of an electric field.

Our insular practices have effectively restricted if not stopped the free flow of the good news from one life to another.  I don’t forsee a change in the future.  It is going to take a disruptive event to affect the inertia developed by modern Christianity

In the meanwhile, delayed obedience is disobedience!